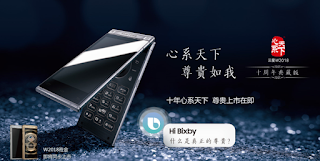 Samsung W2018 is the tenth smartphone under W series and also celebrated its 25 years of presence in China.Samsung W2018 will be available in Platinum Silver and Elegant Gold.

Samsung W2018 is completely built out of metal and looks premium.It weighs 247 grams which heavier than other Samsung devices this due to premium metals used.It features Zinc Alloy bi-axial hinge.When folded the device measures 15.9 mm thick.Samsung W2018 sports two 4.2 inches FHD AMOLED display with a resolution of 1920*1080p.It also comes with a traditional keypad with navigation buttons below the display. 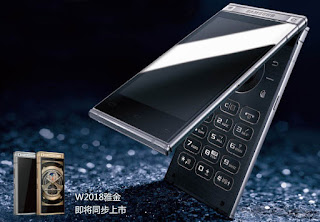 Samsung W2018 is powered by SD835 chip coupled with 6GB RAM and 64GB onboard storage which can be expanded via microSD card slot up to 256GB.It is the first flip phone to come with Bixby AI and it also has a dedicated Bixby button.

The connectivity option includes Dual SIM with 4G LTE and VoLTE support, Dual Band Wifi, A-GPS, GLONASS, Bluetooth 5.0, NFC, USB Type-C port at the bottom, and fingerprint scanner beside the rear camera.The device is fueled by 2300 mAh battery and runs on Android 7.1.1 with Samsung Experience UI on top and will be updated to Android 8.0 later.