Home Samsung Samsung Galaxy A8 Plus (2018) aka A7 (2018) live photo leaked.
Facebook
Twitter
Pinterest
WhatsApp
Samsung upcoming A-series 2018 is all set to launch soon.Earlier we had got the case renders of both Samsung Galaxy A5 (2018) and Galaxy A7 (2018) and also we have spotted the device on FCC. 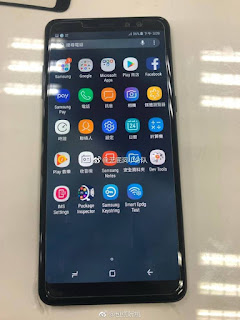 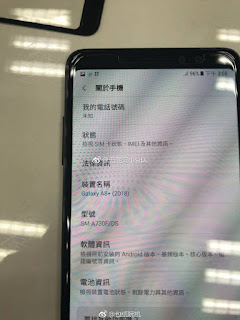 From the leaked images we can see the bezel-less display at the front with thin bezels on the sides and slightly thicker bezels on above the display and below the display.Now, there is no longer a physical home button which is replaced by on-screen navigation buttons.The Volume rocker is on the left and Power on/off switch on the right side of the device.As per the leaked images, the device has got a model number as SM-A730F.

The Infinity display on the Samsung Galaxy A8 Plus (2018) appears to be flat when compared with the curved display on Samsung Galaxy S8 and Note 8.Above the display, we have the Dual selfie camera as per leaked images.Sadly, there are no images showing the rear part of the device.