Home Honor Honor V10 spotted on GeekBench benchmarks
Honor upcoming smartphone Honor V10 is all set to launch on 28 Nov in China. With less than 24 hours left for the official announcement and we have spotted the device on GeekBench. Earlier Honor V10 was spotted on TENAA we also got some renders leaked. 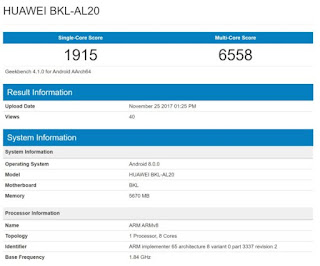 The Honor V10 scored 1915 on single core test and 6558 under multi-core test.Apart from that, there are no more details leaked.There are also rumors of launching the second device with Honor 9 Lite Youth Edition as per earlier leaks.As per earlier leaks, Honor V10 will sports a 6 inches FHD+ display having an aspect ratio of 18:9.