Home Samsung Here are the list of Samsung devices which are rumored to receive...
Samsung is busy testing the Android Oreo update for their flagship devices like Samsung Galaxy S8, S8+ and Note 8. Now we have some latest leaks from China which shares us the list of Samsung devices which might get the Android Oreo updated in coming months.The list of devices receiving the major update was decided last week on Friday. 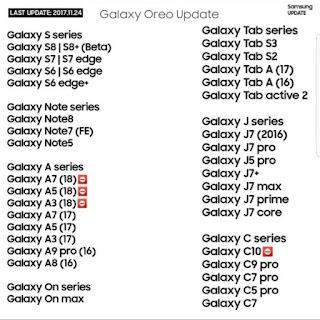 Under Tab-series Samsung Galaxy Tab S3, S2, Tab A (17), Tab A(16) and Galaxy Active Tab 2 are eligible for Android Oreo update.The first stable build of latest Samsung Experience UI with Android Oreo will be hitting the Samsung Galaxy S8 and S8+ early 2018 after that will be made available for Note 8 and all other device mentioned in the list.