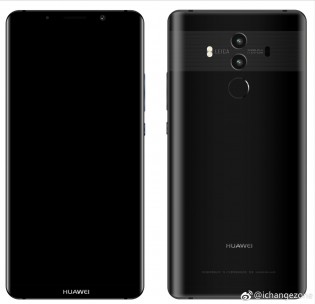 Earlier we have seen the press renders leaked by popular leakster Evan Blass and now we have some more renders of the Huawei Mate 10 Pro leaked by @ichangezone on popular Chinese social media Weibo. 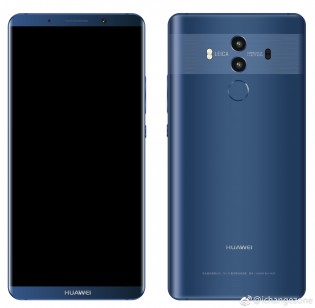 As per latest renders, it exactly matches the earlier leaks and is rumored to come with 18:9 aspect ratio bezel-less display at the front.We have the dual-toned back, with Dual camera setup with Dual Tone LED flash and Laser AF and are certified by Leica. There is fingerprint scanner below the dual camera setup.The new renders are not having the reflective back which earlier leaked images showed and might be some of the other Huawei Mate 10 series devices like Lite, Porsche Edition or regular version.

As per earlier leaks, the Huawei Mate 10 Pro will feature 6 inches QHD+ display.It is powered by Kirin 970 chip. It features f/1.6 aperture Leica certified dual camera and is fueled by 4000 mAh battery.The above leaks might be not accurate too so we have to wait for official announcement.