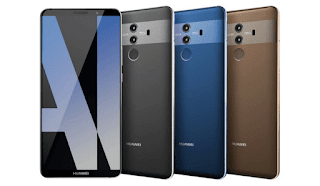 At the back, we have the dual camera setup aligned vertically with an LED flash and Laser AF. It is rumoured to be using f/1.6 aperture similar to last seen on LG V30.Below the camera module, we have the fingerprint scanner and Huawei branding at the bottom of the device.The device is also having the IP67 rating which makes the device dust and water resistant.

As per earlier leaks, the Huawei Mate 10 series will be powered by Huawei own Kirin 970 chip which is having AI engine called NPU.It is also rumoured to come with Samsung DeX like features so you can use your smartphone as PC by connecting it to the large Display.It will also support Miracast powered laptop shells called the Miraxess Book.The device is fueled with 4000 mAh battery with Huawei SuperCharge support and runs Android 8.0 out of the box.