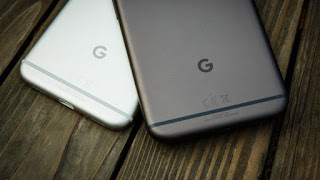 The Google codenamed Walleye will sport a smaller 4.97-inches FHD display. It will be powered by SD 835 chip coupled with 4GB RAM and 64GB onboard storage.It might even have 128GB variant too. The Walleye will still have 3.5mm Audio Jack and will have similar design one found on Pixel.

The Taimen will sport 5.99 inches display with a resolution of 1440p and will be using an OLED panel.It will be powered by same SD835 chip coupled with 4GB RAM and 128GB storage, there might be 256 GB storage option too. It will be having a nearly bezel-less display as per earlier concept design leaks.The two-tone back with Glass will be there but the fingerprint scanner will be moved out of it.As of now, there are no details regarding the Camera for both the devices whether tit will have a Dual camera or single.

We have to wait for few more months for more details about the Taimen and Walleye.