Home Mi Xiaomi begin the production of next gen Surge chip with Surge S2
Xiaomi is all set to launch the upgraded variant of the Surge S1 with Surge S2 this year.The Surge S1 was developed two years back and was launched with Mi 5C last year which was a mid-range device, now we have got news that Xiaomi is currently working on Surge S2 chip. 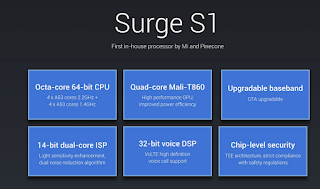 Earlier Surge S1 was manufactured by TSMC was built on 28nm architecture. After few weeks of launching the Surge S1 Xiaomi started working on a successor to Surge S1.As per Taiwanese media, the mass production of Surge S2 will begin soon.Xiaomi has already conducted the test for the new Surge S2 chip and will be manufactured by same vendor TSMC.

Surge S2 chip will be built on 16nm process and mass production will start from the third quarter of this year. Surge S2 will be launched with Mi 6c and Mi 6s.Surge S2 will have four Cortex A53 cores running at 2.2 GHz speed and another four Cortex A53 cores running at 1.4 GHz coupled with Mali-T860MP4 GPU.It features CAT 4 LTE modem and supports  LPDDR3 RAM and eMMC 5.0 storage.
As per the specs is concerned it will not be powerful as SD 625 as it is built on 14nm architecture.It could be similar to SD652 or SD625 chip as per performance is concerned. So by this, we can confirm that Xiaomi is planning to launch the low end or Mid range devices with this chip.