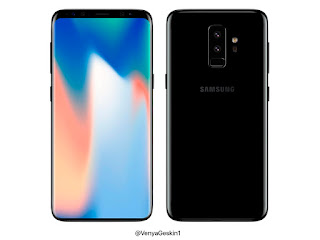 As per Dutch Tech Blog Galaxy Club, Samsung upcoming smartphone S9 will not have 21:9 aspect ratio display. As per earlier leaks, we can expect it to come with a higher screen to body ratio with thinner bezels below the display. Earlier leaks also claim that upcoming Samsung Galaxy S9 and S9 Plus will retain the same screen size of 5.8 inches and 6.2 inches and will feature the same Infinity display with a resolution of QHD+ having an aspect ratio of 18.5:9.But will have improved color reproduction and also will be more power efficient than the predecessor.

New renders leaked by Benjamin Geskin on Twitter, show us the all-new Samsung Galaxy S9 with the nearly bezel-less display.Now it has the thinner bottom chin with a higher screen to body ratio.At the back, we can see the dual camera setup which is aligned vertically and the fingerprint scanner is located below the camera module.The LED Flash and heart rate sensor are placed beside the camera module.The power button is on the right and volume rockers at the left of the device.

Apart from that, we also got the screenshot of the Samsung Health app which shows us the fingerprint placement which is now located below the camera module.