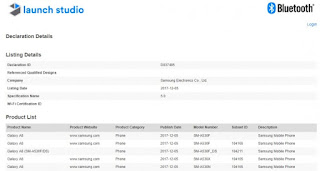 As per earlier leaks, the upcoming Samsung galaxy A8 and A8+ will be having bezel-less Infinity display having an apsect ratio of 18:9 with a resolution of 2160*1080p.The Samsung Galaxy A8 will be powered by SD660 or Exynos 7885 SoC coupled with 4GB RAM.As of now, there are no details about pricing and availablity.