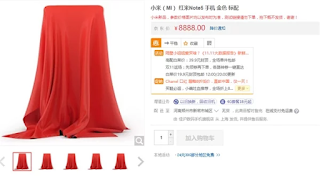 As per the listing on JD.com, the Xiaomi Redmi Note 5 is priced at 8,888 Yuan (Rs.9000/-) apart from pricing there is no mention of specs and we can see the device which is covered with a red cover so might be the device is launching soon.

As per TENAA, Xiaomi Redmi Note 5 sports 5.9 inches FHD+ display having an aspect ratio of 18:9.It is made out of metal and comes with the rear-mounted fingerprint scanner.It is rumored to be powered by SD636 Chip or MediaTek Chip coupled with 3GB/4GB RAM and 32GB/64GB onboard storage which can be expanded via microSD card slot.All this is fueled by 4000 mAh battery and runs on Android 7.1.1 with MIUI 9 on top.