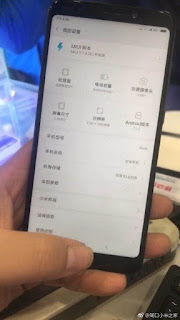 The new leaked live image of  Xiaomi Redmi Note 5 was posted on Weibo yesterday which show us a device with specs details.As per leaked image, we can see the device is now having a similar design as per previous leaks and also having thinner bezels with rounded edges. On the top of the display, we have the front-facing camera, sensor, and earpiece. There is nothing below the display and comes with on-screen navigation keys.Sadly there are no images leaked showing the rear part of the device.

As per image, the Xiaomi Redmi Note 5 will sport 5.99 inches diagonally FHD+ display with an aspect ratio of 18:9.It is powered by SD625 chip and it is having 64GB onboard storage.It is having a 12MP rear camera with LED flash.The device is fueled by 4000 mAh battery and runs on Android 7.1.2 with MIUI 9 on top.