Home OnePlus OnePlus 5T will cost more than predecessor- Peter Lau, front panel leaked.
Facebook
Twitter
Pinterest
WhatsApp
OnePlus is all set to launch the OnePlus 5T on Nov 16 in New York and as days are getting near we are flooded with back to back leaks about the device.Now as per CEO Peter Lau the upcoming OnePlus 5T will be priced higher than OnePlus 5 as per a post on Weibo.

Earlier leaks revealed that the OnePlus 5T will have exactly the same design as the recently launched Oppo R11s.It will be completely built out of metal unibody design and will come with a horizontally aligned Dual camera at the back.It will feature 6.01 inches FHD+ AMOLED display having an aspect ratio of 18:9. 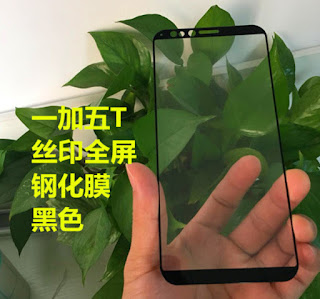 Apart from that, we also got the front panel of the upcoming OnePlus 5T leaked.As per the leaked images, we can see the OnePlus 5T front panel which resembles the Oppo R11s which was announced earlier this month.

From leaked images, we can see the thin bezels at the sides and thick bezels above and below the display with rounded edges.There is no home button this time and they have moved the fingerprint scanner at the back of the device.

OnePlus 5T will have the same internals as the OnePlus 5 and will be powered by SD845 chip coupled with 6GB/8GB RAM and 64GB/128GB onboard storage.It might come with 20MP and 16MP dual camera setup which might include a new sensor.The selfie camera is bumped to 20MP as per earlier leaks.OnePlus 5T will go on sale starting from Nov 28 in India and will be exclusive to Amazon.