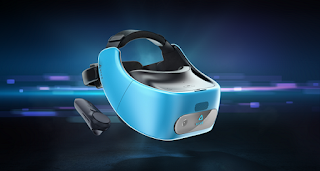 The HTC Vive Focus VR headset comes with 6 degrees of freedom tracking and as it doesn’t rely on cables but it comes with the single wireless motion controller.The main highlights of the device are it features an AMOLED screen and is powered by SD835 chip.

HTC Vive has also partnered with Unity for making the one-click publishing the VR content on the Viveport for both PC and standalone VR devices.As of now, there are no details about pricing and availability and currently, it is only available in China.