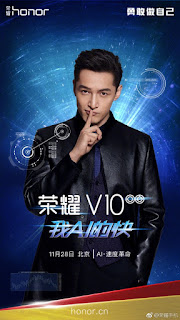 As per earlier leaks, the Honor V10 is rumored to sport 6 inches bezel-less display having an aspect ratio of 18:9. It will be powered by same Kirin 970 chip which made debut with Huawei Mate 10 and Mate 10 Pro coupled with 6GB/8GB RAM and 64GB/128GB onboard storage.

It will come with Dual camera setup at the back with 16MP+20MP sensors.It will be fueled by 4000 mAh battery support for fast charging. As per Honor CEO, the device will be running on Android Oreo out of the box with EMUI 8.0.

The Honor V10 will be the cheaper version of the Huawei Mate 10 and is expected to be priced at 3000 Yuan (Rs.30,000/-).As of now, there are no details regarding Indian launch and availability.