Home Xiaomi Xiaomi Redmi Note 5 spotted on GeekBench
Xiaomi upcoming Redmi Note 5 which is the successor of most popular Redmi Note 4 is all in news.Now the Redmi Note 5 was recently spotted on the popular benchmarks the GeekBench.Every time we see some leaks which were spotted on Benchmarking sites will not be accurate always. 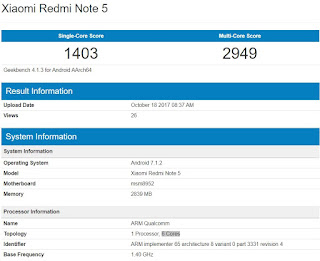 Earlier we had rumours of the Redmi Note 5 to sports a bezel-less FHD+ display having an aspect ratio of 18:9 and will be powered by SD660 chip.We also got some renders of the device showing the bezel-less display.Now as per GeekBench, the upcoming Redmi Note 5 will be powered by Qualcomm msm8952 which is none other than the SD617 chip which is clocked at 1.4 GHz and coupled with Adreno 406 GPU.If the benchmark leaks are true, it is shocking to see Xiaomi using a downgraded CPU over the SD625 which was powering the predecessor.

Apart from that, the Redmi Note 5 is coupled with 3GB RAM and no mention of storage probably might come with 32GB internal storage.The connectivity option includes Bluetooth 4.1, USB Type-C port and support for QC 3.0.It is running on Android 7.1.2 out of the box.

As per earlier leaks, the Redmi Note 5 is rumoured to be fueled with 3790 mAh battery.It is rumoured to be using 13MP selfie camera and 16MP+5MP dual camera at the back of the device.It will be available in 4GB+64GB and 3GB+32GB version and will sport an FHD+ display with an aspect ratio of 18:9.