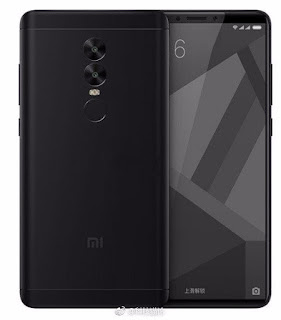 As per leaked images, we can see the all-new bezel-less display design under budget smartphone and doesn’t look like any other Redmi Series smartphone but it exactly matches the previous leaks of the Redmi branded smartphone which was Silver colour and now we have the Black colour variant.

We are still not sure whether the above-leaked device is the Xiaomi Redmi Note 5 or not but will be surely releasing in the future.It is completely built out of metal with curved edges.There is dual camera setup with Dual tone LED flash at the back of the device and a fingerprint scanner below the dual camera setup.There are antenna bands running above the camera module and below the MI branding. At the front, we have a nearly bezel-less display having an aspect ratio 18:9 with very thin bezels on all sides.Above the display, there is selfie camera with earpiece and sensors.There is nothing below the display and might be the first Redmi device featuring on-screen navigation button.The Volume Rocker and Power on/off switch are on the right of the device.

As per the source, the Xiaomi Redmi Note 5 will come in two variants one with MediaTek Helio P25 coupled with 3GB RAM and 16GB or 32GB onboard storage and other the higher version will be powered by SD630 chip coupled with 4GB RAM and 64GB onboard storage.There will be one more variant which will be the cheapest among other two will feature a 5.7 inches HD display and will be powered by SD450 chip and is rumored to be priced at $121 (Rs.8000/-) whereas the MediaTek variant is priced at $196 (Rs.13,000/-) and Snapdragon variant will cost $242 (Rs.16,000/-).