Home Oppo Oppo upcoming smartphone Oppo F5 specs and retail box leaked.
Oppo upcoming successor to the last year mid-range smartphone Oppo F3 with Oppo F5 is all set to launch next week.Earlier we had got some leaks which show us the new bezel-less design and some key specs of the device.Now we have got some more leaks of the device which show us the retail box of the Oppo F5 and also some more specs details leaked. 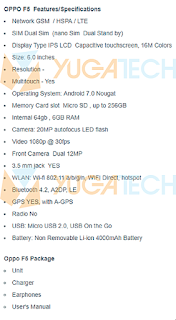 Recently the Oppo F5 was listed on Philippines based online retailer and is also going to launch in the Philippines first.As per the listing on the retailer website, the Oppo F5 sports 6 inches IPS LCD display there are no details about the resolutions used but as per earlier leaks, it might come with an FHD+ display having a resolution of 2160*1080p.There is also no mention of the processor used but as per earlier leaks, it will be powered by SD630 chip and as per listing it will be coupled with 64GB onboard storage and 6GB RAM.

The Oppo F5 will feature Dual 12MP camera sensors at the front and a single 20MP camera at the back of the device as per the online retailer.The Oppo F5 will be Dual SIM smartphone with 4G LTE and VoLTE support and also the memory can be expanded via microSD card up to 256GB.It will have 3.5 mm audio jack and is having micro USB port at the bottom of the device.All this fueled with 4000 mAh battery and is running on Android 7.0 out of the box with ColorOS on top. 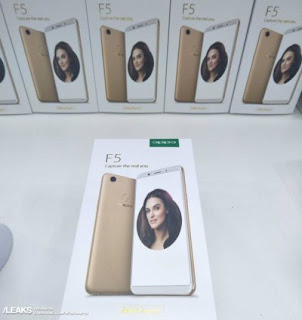 Apart from that, we also got the images of the retail box along with Promo poster which shows us the Oppo F5 design from the front.From the leaked images, we can see the Oppo F5 Gold colour variant with White at the front and Gold colour back and the box is white in colour with Oppo logo and image of the Oppo F5.

From the leaked images, we can see the new Oppo F5 design with thin bezels on all the sides with rounded corners.At the back, we have the single camera with Dual Tone Dual LED flash and fingerprint scanner below it.At the front above the display, we have the Dual selfie camera with earpiece and sensors.Unlike the Oppo F3, the Oppo F5 will feature on-screen navigation button instead of a physical home key and capacitive back and menu buttons seen on Oppo F3.We also saw some leaks of rumoured OnePlus 5T/6 which also look like the Oppo F5.

We also got the Promo banner leaked which claims that Oppo F5 will come in three variants.The Oppo F5 will be available in two variants one with 4GB RAM and other 6GB RAM whereas the third variant is called as Oppo F5 Youth. 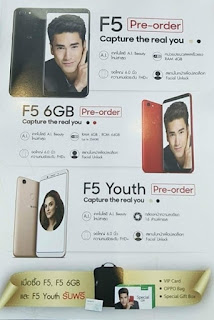