Home Nokia Nokia sends out media invites for new device launch in India, Nokia...
Nokia recently launched the newest mid-range flagship with Nokia 7 in China last week.Yesterday, Nokia has sent media invites of launch event held on Oct 31 in New Delhi.We are still not sure whether Nokia will launch the Nokia 7 in India or the rumoured cheapest Nokia smartphone Nokia 2. 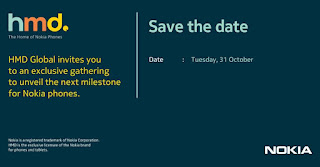 As per the media invite, HMD Global has mentioned the next milestones of Nokia smartphones without much info about the device.It is rumoured to be a mid-range smartphone from Nokia.So with that, we can expect Nokia might launch the latest offering with Nokia 7 in India next week.

Nokia 7 features 5.2 inches FHD display. It is powered by SD630 chip with 4GB/6GB RAM and 64GB storage which can be expanded via microSD card.It is having 16MP Carl Zeiss lens rear camera and 5MP selfie camera.The device is running on Android 7.1.2 and will be upgraded to Android Oreo later.The device is priced at $375 (Rs.24,500/-) for the base variant in China.

Apart from that, Nokia cheapest budget smartphone Nokia 2 is now listed on popular Online retailer B&H in the US.Soon after some time, B&H is taken down the listing of the Nokia 2. 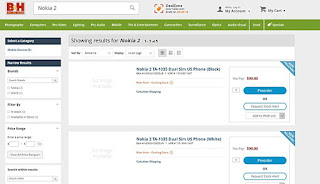 Earlier we had spotted the Nokia 2 on Russian Certification website and now on B&H website in the US. So Nokia might launch the cheapest Nokia Android smartphone with Nokia 2 anytime soon.