Home HTC HTC U11 Life spotted on GeekBench specs leaked.
HTC first Android One smartphone with HTC U11 Life is now spotted on popular benchmarking site GeekBench.With back to back leaks about the device, we finally have the specs details leaked on Geekbench.The rumoured HTC U11 Life is expected to be launched on Nov 2 in Taipei. 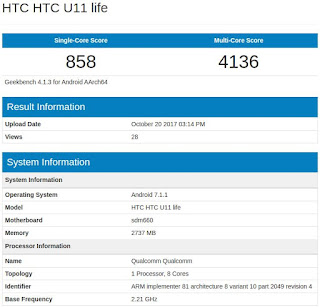 As per GeekBench, the upcoming HTC U11 Life is now powered by SD660 chip coupled with 3GB RAM and there is no mention of storage as of now.Earlier leaks claimed that the HTC U11 Life will be powered by SD630.The device is running on Android 7.1.1 out of the box and might be upgraded to Android Oreo in the future.
The device scored 4136 points under multi-core test and 858 points under single core test.As per earlier leaks, the HTC U11 Life is rumoured to be having 5.2 inches FHD display. It is having base 32GB storage variant.It is also having an IP67 certification which makes the device dust and water resistant.The device is using the latest Bluetooth standards with Bluetooth 5.0, with USB Type-C port and no 3.5 mm audio port.All this is fueled with 2600 mAh battery.It is rumoured to have both front and rear camera of same resolution with 16MP.As of now, there are no details regarding Indian launch and availability.
Source
Share2
Tweet
Share
Pin1
3 Shares