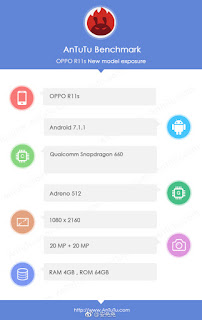 As per AnTuTu Benchmarks, the Oppo R11s sports FHD+ display having a resolution of 2160*1080p with an aspect ratio of 18:9.So, now Oppo too following the 18:9 display trend with Oppo R11s and Oppo F5.It is powered by SD660 chip coupled with 4GB RAM and 64GB onboard storage which can be expanded via microSD card.

The Oppo R11s is having a 20MP camera on both fronts as well as the rear of the device when compared with Oppo R11 20MP rear and 16MP selfie camera.It is running on Android 7.1.2 with the latest version of Color OS on top.There are rumours of one more variant of Oppo R11s having 6GB RAM and higher storage option. Earlier the Oppo R11s and R11s Plus where even spotted on Chinese 3C certification website.We are not sure whether Oppo R11s will ever launch in India anytime soon.