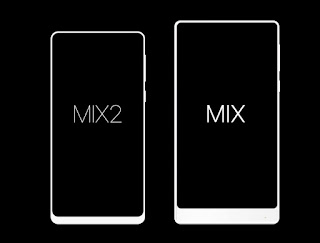 As per Industry insider, Benjamin Geskin has uploaded the newly leaked image on Tuesday which shows the comparison of the Mi Mix with Mi Mix 2 and also mentions the screen size of the Mi Mix 2 as 6.2 inches.As per the images, we can see the nearly bezel-less display with the very thin bezel on the bottom of the display where we can see the cut out for the front-facing camera.

Are you excited? I am. pic.twitter.com/ALhYNR8HxB

As per earlier leaks, now the Xiaomi Mi Mix 2 will have 93% of Screen to body ratio when compared with 91% on original Mi Mix.It will also have the new 18:9 aspect ratio display when compared with 17:9 on Mi Mix.The display will be similar to one found on LG G6 and LG V30.The Power key along with Volume Rocker will be on the right of the device as per above infographics.
Xiaomi CEO already confirmed that the Mi Mix 2 has entered mass production and also shared the images of the retail box.We need to wait for few more days as Xiaomi will be officially unveiling the all new Xiaomi Mix Mix 2 on Sept 11.
Share
Tweet
Share
Pin
0 Shares