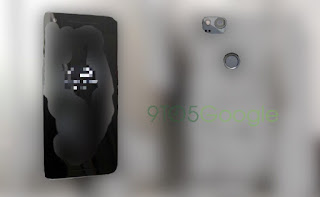 From the leaked images, we can see the back which is now having Dark Silver plate with Gray Glass panel and the black case at the front.The leaked images also show that the code name Walleye aka Pixel 2 will come with Laser AF system on the rear camera. There is also Dual Tone Dual LED flash beside the camera.We can also see the rear mounted fingerprint scanner below the camera module.

According to latest leaks, the Google Pixel 2 will sport 4.97 inches FHD display with an aspect ratio 16:9 and will have similar display one found on earlier Pixel devices and will not feature bezel-less display. It will also have front-facing stereo speakers and there is no 3.5 mm Audio jack this time, instead, Google will be providing a newly developed dongle to connect 3.5 mm audio via USB Type-C port placed at the bottom of the device.

Google Pixel 2 will have two storage variants one with 64GB and 128GB.It will also have an IP68 rating which makes the device dust and water resistant.Pixel 2 will be the first device to come with the stable build of the Google Lens AR app and will run on the latest Android 8.1 out of the box.Now both the Pixel 2 and Pixel 2 XL will have Always-On display feature instead of the Ambient display which was present on earlier Pixel devices.

Both the devices will be powered by SD835 chip coupled with 4GB RAM and will feature Dual front-firing stereo speakers and  HTC made Edge Sense tech one found on HTC U11.As per earlier leaks, Google Pixel 2 XL will be made by LG and will have 5.9 inches display with an aspect ratio 18:9 similar to one found on LG G6 and LG V30.Both the Pixel 2 and Google Pixel 2 XL will be launched in October and might have slightly higher price than the previous generation.