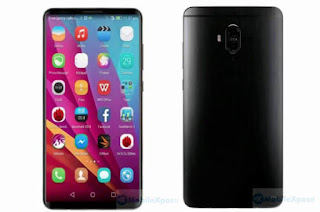 As per the leaked images, show us the Huawei Mate 10 Pro with the nearly bezel-less display at the front with no sign of front-facing camera but there is earpiece on the top of the display and below the display, we again have thin bezels surrounding it.At the back, we can see the vertically aligned Dual camera setup with Dual tone Dual LED flash beside it.There is even no fingerprint scanner on the device.

As per leaked images, the device is showing 70% battery left and also there are two battery indicator icons showing on the navigation bar, which is confusing and might be due to to the blurry images.As per leaks, the Huawei Mate 10 Pro will come with Leica -certified camera sensors. It will be now powered by recently launched Huawei HiSilicon Kirin 970 chip which also comes with separate AI chip. It is coupled with 6GB RAM and 64GB onboard storage which can be expanded via microSD card.All this is fueled with 4200 mAh battery.