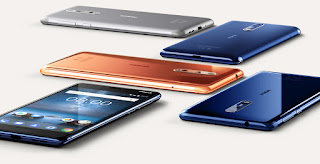 According to the website WinFuture, the Nokia 8 6GB RAM and 128GB storage version will launch on Oct 20 and will be priced 669 Euros (52,000/-) which is 69 Euro more than the 4GB RAM version of Nokia 8.The website also mentioned that the Nokia 8 will come only in one colour with Polished Blue.As earlier, we have spotted the same hardware of Nokia 8 on FCC documents in the USA which means that it might go on sale after Germany launch.

Apart from the RAM and storage, there will be no major changes in the hardware of the Nokia 8.It comes with 5.3 inches QHD display with Corning Gorilla Glass 5 for protection.Nokia 8 is powered by SD835 chip coupled with 4GB+64GB and  6GB+128GB storage options.It comes with the Dual camera set up at the back one with the 13MP monochrome sensor and another 13MP camera with RGB sensor.All this is fueled by 3,090 mAh battery and the device is running on Android 7.1.1 out of the box.Nokia 8 is going to launch in India on Sept 25 we are not sure whether Nokia will launch the 6GB RAM and 128GB storage version.