Home Google Google teases camera samples of upcoming Pixel devices.
After series of leaks about the upcoming Pixel 2 and Pixel 2 XL finally we got the launch date which is now launching on Oct 4 in the US.Yesterday, we also got the teaser of the upcoming Google Pixel devices which claimed to have larger battery life, better performance, and a great camera. 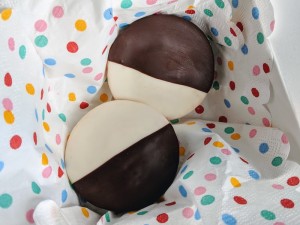 Now we have camera sample images of the upcoming Google devices were spotted by some of the Reddit users on Google website.The above image of the Cookie is leaked from the teaser page and digging further into the EXIF data we got to know the exact location of the image which was shot in Google Building 43 in Mountain view which is more than enough to claim that the pic is captured from one of the upcoming Pixel devices. 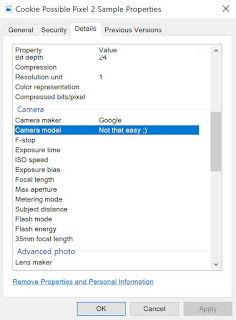 Apart from that, the image has a resolution of 800 x 601 and Camera model it has mentioned Not that easy 🙂 and comment read “Stay tuned for Oct 4”.As per earlier leaks, the Pixel 2 will have 4.99 inches FHD display with an aspect ratio of 16:9 and will come with thick bezels and the device will be manufactured by HTC.The Pixel 2 XL will have 5.7 inches QHD display having an aspect ratio of 18:9 similar to one found on LG V30 and LG G6 and the device is rumored to be manufactured by LG.Both the devices will be powered by SD835 chip coupled with 4GB RAM and 64GB onboard storage.
Apart from that, both the Pixel smartphone will have an IP68 rating which makes the device dust and water resistant.It will also have the Edge Sense feature which was seen on HTC U11.We have to wait for few more days as Google will announce it next Pixel device on Oct 4.
Source
Share1
Tweet
Share
Pin
1 Shares

Google Pixel 7 Pro detailed specs leaked online will not get any major upgrades after all.

New leak reveals the detailed specs of the upcoming Pixel 7 ahead of the launch.