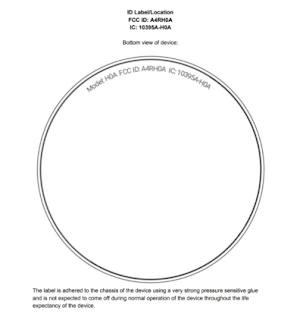 A new media streaming device made by Google was spotted on FCC, it might be the Google Home Mini but we are not sure as there are no details leaked apart from the model number.The FCC document has mentioned the model number of the media streaming device as HA01.As per the images leaked from FCC document, the device base will be round shaped and there is also mention of FCC number on the bottom of the device.So we can expect it to be the second generation of Google Home or might be the previously leaked Google Home Mini which even had a similar shape.

FCC documents mention it as Media streaming device which further states that it is interactive and is a tabletop device.The FCC documents tell that the device should be placed on the tabletop during operation.Apart from this, there are no details leaked so we can expect the device to be launched on Oct 4 which is just two weeks ahead from today.