Home Google Chromebook named Soraka spotted on GFXBench.
Facebook
Twitter
Pinterest
WhatsApp
Recently a new Chromebook which is named as Soraka been spotted on popular benchmarking website GFXBench.The Chromebook comes in three different screen sizes probably it might have a detachable screen and the Chromebook are not made by Google.Earlier there were rumors of Google working on new Google Home and Chromebook which is scheduled to launch with Google Pixel 2 and Pixel 2 XL. 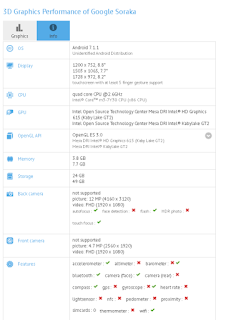 The Chromebook Soraka comes with a 12MP rear camera with AF, touch focus and LED flash and 5MP selfie camera.The device is running Android 7.1.1 out of the box and will be upgraded to Android 8.0.

We are not sure whether these 2 in 1 Chromebooks ever going to land in India or not as of now. We have to wait for few more weeks as Google might launch these devices with Pixel 2 and Pixel 2 XL later next month.