Apple finally unveiled its latest smartphone with Apple iPhone 8, 8 Plus and iPhone X at Apple event held in Steve Jobs Theater in Cupertino this week. After announcing the device t was trending on all popular Social media channels for quite a few days.Now we have the latest GeekBench benchmarks score which not tops and beats every other Android device launched in the market. 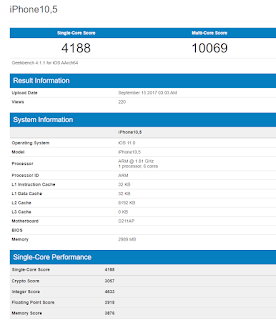 The Apple all-new A11 Bionic chips top the GeekBench benchmarks scores with double the single core test score of the last year A10 Fusion chip which was already on top of SD835 chip and Exynos 8895 chip.Now the A11 Bionic chip has got higher multi-core test than any other previously launched devices.

The Apple iPhone X scored 10,069 on multi-core test which is above the recently launched Samsung Galaxy Note 8 which got a score of 6784.The Single core test score for iPhone X was 4188 whereas the Note 8 has got lower than S8 and iPhone 7 Plus with 1987.The Apple iPhone X comes with A11 Bionic Chip coupled with 3GB RAM same as iPhone 8 Plus.Even the iPhone 7 Plus comes with 3GB RAM whereas the iPhone 7 and iPhone 8 has 2GB RAM.

The iPhone X is powered by Apple new A11 Bionic Six core Chipset which has 64-bit architecture and comes with Neural Engine and M11 motion coprocessor.There are two storage variants with 64GB and 256GB models.The Apple A11 Bionic Chip is having two high-power cores and is 25% faster than the Apple A10 Fusion Chip.Whereas the other four cores are power efficient and are 70% faster than two low-power cores on A10 Fusion chip.The Apple A11 is using own Apple made GPU for the first time which has 3 cores and is 30% faster performance than Apple A10 Fusion chip.

Apart from that, we also got the total cost of the Apple iPhone X.Apple has priced the iPhone X at $999 in the US and Rs.89,000 in India for the base model with 64GB onboard storage.

As per Industry Insider in China, the Apple iPhone X has a total cost of $412.75 (Rs.27,000/-) which is a lot cheaper than the original $999 price tag.The price was calculated from all the component cost and came up with the total cost of the device.The above price $412.75 doesn’t include manufacturing cost, logistic cost and R&D cost. 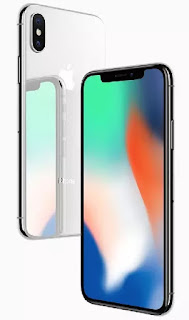 The iPhone X is all set to go on sale starting from November 3.