Home Mi Xiaomi code-named device Chiron spotted on GFX Benchmarks.
Earlier we had few leaks about the rumored Xiaomi codename device Chiron which was spotted again, but now in GFX Benchmarks. The code-name Chiron was rumored to be the recently launched Mi Mix 2 but now as per GFX, the specs are completely different when compared with Xiaomi Mi Mix 2.Xiaomi Chiron will be one more high-end device from Xiaomi which might launch by end of this year. 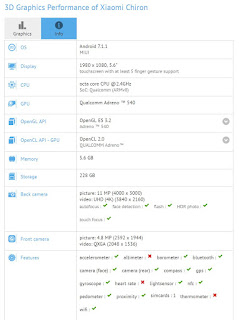 As per GFX Benchmarks, Xiaomi Chiron comes with 5.6 inches FHD display with an aspect ratio of 16:9 whereas the Mi Mix 2 comes with 6 inches FHD+ display which now has an aspect ratio of 18:9.Apart from this, all other specs are similar to Xiaomi Mi Mix 2.Now the Xiaomi Chiron is powered by SD835 chip coupled with 6GB RAM and 256GB onboard storage.

As per GFX Benchmarks, the device will have a 12MP rear camera with LED flash, AF, HDR and 4K video recording.There is 5MP selfie camera which can record videos up to 2K and no mention of LED flash.

Xiaomi Chiron comes with NFC, Bluetooth, A-GPS, and Wifi.The device is running Android 7.1.1 with MIUI 9 on top.Based on the above specs we can expect the Xiaomi Chiron to be called the most rumored device with Mi 6 Plus which was earlier rumored to be launched with Xiaomi Mi 6 which didn’t happen instead Xiaomi launched the Mi Note 3 with the identical design.As of now, there are no details regarding the launch date and availability.