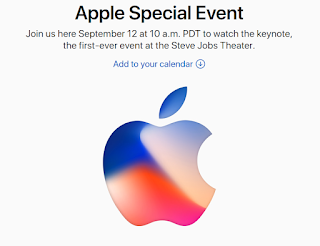 And finally, it is Sept 12 whole of the tech world was waiting for this day for most rumoured and much awaited Apple iPhone 8 or anything they call iPhone X.As we are just a few hours left for the official announcement we have now spotted the iPhone 8 again not just that we also got some details of the upcoming A11 chip and even the all new Apple TV leaked.

Source: GSMArena
Apple is all set to launch a bunch of devices today in Cupertino at the Steve Jobs Theater.Recently we have got the lots of leaks and rumours of the next iPhone 8  and now we have got video leaked which shows us the all new iPhone 8 which is having Red colour.This is the new colour addition after we saw iPhone 8 in Black, White and Gold colour.The leaked video is shot in Guangzhou in China at Showroom or might be the QA dept.

Recommended reading: iPhone 8 will go on sale in November due to limited parts shipment.

After launching iPhone 7 with the Red colour we can hope that next iPhone 8 too will come with new Red or Burgundy colour option.And the Gold colour doesn’t look like Gold instead it looks like Bronze.

As per leaked Config files, the upcoming Apple TV can play 4K videos up to 2160p with HDR support i.e both HDR10 and Dolby Vision.If you want to stream the 4K content then you need to have a stable internet connection with speed support of minimum 15 Mbps.
Apple TV 4K HDR will now be powered by three core Apple A10 Fusion chip coupled with 3GB RAM which is similar to what we saw on iPhone 7 Plus.
Apart from above two we now have the last news with Apple latest chip with Apple A11 which will be powering the upcoming iPhones and iPads.

Just to clarify on the A11: it’s two high-power Monsoon cores and four low-power Mistral cores, all independently addressable. No Fusion

As per the leaks by Apple Dev Steve-TS, the upcoming A11 chip will be having two high power Monsoon cores and four low power Mistral Cores.All the cores will be running together and can be independently controllable.Apple Dev Steve-TS early had leaked some of the details for Apple new Face ID, and new emojis.
Whereas the Apple iPhone 7 and 7 Plus is having two high power Hurricane cores and two low power Zephyr cores which don’t run together instead one cluster can run at a time either high power or battery efficient cores.
We have to wait for just a few more hours as Apple will unveil its latest device with iPhone 8 today.