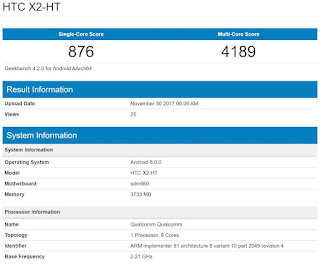 As per the GeekBench, the device is powered by SD660 chip clocked at 2.21 GHz coupled with 4GB RAM and no mention of internal storage.The HTC X2-HT is running on Android 8.0 out of the box. Apart from this, no other details have been leaked.The device scored 876 on single core test and 4189 on multi-core test.

HTC has earlier launched its latest mid-range with HTC U11 Life which was powered by SD630 chip and the above device might be the International variant of the HTC U11 Life and there are also rumors that the above device might even be the successor to early 2017 launched HTC U Play with HTC U Play 2.There are rumors of HTC launching its next mid-range device in early 2018.