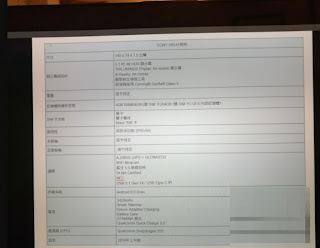 Sony first bezel-less flagship is listed as Sony H8541 will sport 5.7 inches 4K HDR Triluminos display with Sony X-reality engine and Corning Gorilla Glass 5 on top.Sony H8541 is thin at just 7.5 mm.
As per leaked images, the device is powered by SD835 chip coupled with 4GB RAM and 64GB onboard storage which can be expanded via microSD card.Sony using the older SD835 chip over the SD845 is due to the lack of availability as Qualcomm SD845 chip will be made available only in late Feb 2018 so due to which Sony has opted the older gen chip.
The Sony H8541 will be Dual SIM device with 4G LTE and VoLTE, A-GPS, GLONASS, Dual Band Wifi, Bluetooth 5.0, NFC, USB Type-C port and will also come with an IP68 rating which makes the device dust and water resistant.All this is fueled by lower 3420 mAh battery with Qualcomm QC 3.0 support and runs on Android 8.0 out of the box.
Source
Share3
Tweet
Share
Pin1
4 Shares