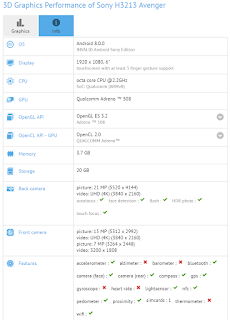 Sony is all set to launch their first Dual camera smartphone soon.As per listing on GFXBench the device is listed as Sony H3213 Avenger which might be the model number of the device with a code name.Sony H3213 Avenger sports a 6 inches FHD display. It is powered by SD630 Octa-core chip clocked at 2.2 GHz coupled with 4GB RAM and 32GB onboard storage, no mention of SD card slot.
Sony H3213 Avenger comes with the Dual camera at the front of the device with a 16MP+8MP sensor which can record videos up to 4K.The rear camera is of 21MP with support for 4K video recording, HDR, AF, PDAF, LED flash and touch focus.
The connectivity options include Single SIM, Wifi, Bluetooth, NFC, and A-GPS.The sensors include Pedometer, Proximity sensor, accelerometer, and Compass.Probably the upcoming Sony H3213 Avenger is a mid-range device from Sony and might be none other than Sony XA Ultra.
Source|Via
Share2
Tweet
Share
Pin1
3 Shares