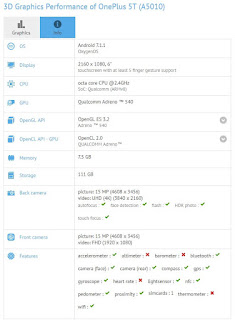 As per GFXBench listing, OnePlus 5T is having a model number A5010 is now having 6 inches bezel-less display with a resolution of 2160*1080p which is having an aspect ratio of 18:9.It is powered by SD835 chip coupled with 8GB RAM and 128GB onboard storage which is listed at 7.5GB RAM and 112GB internal storage.