As per KGI analyst Ming-Chi Kuo, the upcoming Note 9 will have a fingerprint scanner embedded beneath the display and Samsung might finally commercialize the tech next summer.Samsung still has not selected the supplier for the components required to develop the optical fingerprint scanner on the smartphones, but as per the report, it is still considering three major suppliers for the same. 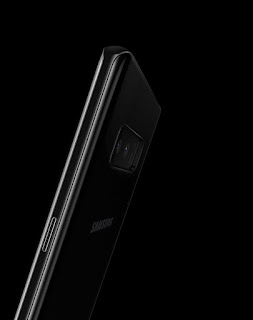 As per source, the Samsung optical fingerprint tech relies on OLED display which not only protects the sensor but also doubles up as a light source.If this features which run the fingerprint sensor with the light sensor and doesn’t need an extra lighting solution will allow Samsung to deliver a system that is more power efficient and will not consume much power.Samsung LSI and Beyond Eyhavehas already delivered some of the sample components of the under display fingerprint technology to Samsung Electronics as per Kuo.Egis may be the commissioned as an additional component partner who had earlier made fingerprint scanners for Samsung devices.

Samsung may finally commercialize the in-display fingerprint tech next year and might debut with Samsung Galaxy Note 9.As per reports the Samsung upcoming Samsung Galaxy S9 and S9+ will not have this feature instead will have traditional fingerprint scanner behind the device.Samsung trired to include this feature in Note 8 but was not successful and even Apple tried but was even not successful to implement on iPhone X and will not come in next year Apple made A12 chips too.