Home HTC HTC sends press invites for event scheduled on Nov 2 probably HTC...
HTC recently sent out media invites to all major publication across the world for the upcoming launch event which is scheduled on Nov 2 at Taipei.Earlier we had leaks of HTC U11 Plus which might be launching on Nov 2.HTC U1 Plus is the successor to the HTC U11 which was launched in May this year. 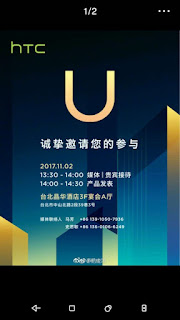 From the press invite, we can see the U symbol with the event details so we can expect HTC U series device will be launching on Nov 2.As per earlier leaks HTC U11 Plus is rumored to have bezel-less 6 inches QHD+ (2880*1440) display with an aspect ratio of 18:9 over the 5.5 inches QHD display on HTC U11.It is powered by same SD835 chip coupled with 4GB/6GB RAM with 64GB/128GB onboard storage and might come with microSD card support.

The HTC U11 Plus will use a 12MP sensor with an aperture of f/1.7 and OIS support.The rear camera also comes with support for 4K video recording and Ultra-Focus technology.It has 8MP selfie camera but there were some leaks claim to have 16MP selfies camera.It is rumored to be available in two colors with Brilliant Black and Amazing Silver.The Connectivity option includes USB-Type C port, Dual SIM, A-GPS, Wifi, Bluetooth 5.0, and fingerprint scanner.HTC U 11 Plus will also have an IP68 certification which makes the device dust and water resistant.It is fueled with 3300 mAh battery with support for QC 3.0 and device runs Android Oreo with HTC Sense UI on top.It might be available globally by Dec 2017.