Home Mi Xiaomi upcoming Mi Mix 2 specs and live images of screen leaked.
Facebook
Twitter
Pinterest
WhatsApp
Xiaomi is all set to launch the successor to last year launched Xiaomi Mi Mix with Mi Mix 2 on Sept 11 in China.As the days are nearing towards launch we are getting back to back leaks regarding the device.It is just 10 days left and we have got some leak images of the display panel leaked on popular Chinese website Weibo. 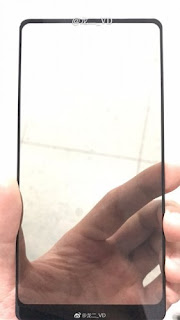 From the leaked image, we can see the completely bezel-less display which looks similar to earlier launched Mi Mix which had front-facing camera at the bottom of the screen and we can even expect similar thing to happen with the Mi Mix 2 as there are no bezels on the top instead it has thick bezels at the bottom of the screen.Mi Mix 2 will now feature lower 6 inches display instead of 6.4 inches on original Mi Mix. 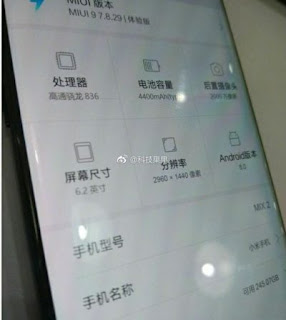 Apart from that, now we also got the live device images which show some of the key specs of the device.As per leaked images, the Xiaomi Mi Mix 2 will be powered by SD836 chip which is a minor upgrade over the SD835 chip.It also shows that the device has 256GB internal memory. Now as per the images, Xiaomi Mi Mix 2 will feature 6.2 inches display with a resolution of 2960 x 1440p. 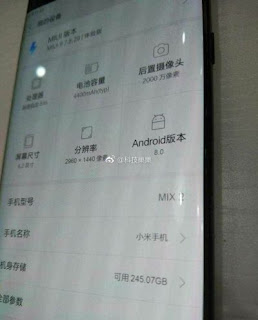 Xiaomi Mi Mix 2 will feature the 20MP rear camera with LED flash. There is no mention whether it will have the dual camera or single camera.Apart from that, the device will be fueled with larger 4,400 mAh battery.The device will be running latest Android 8.0 out of the box with MIUI 9 on top.We are shocked to see the device is running recently launched Android Oreo with a custom skin on top.As per earlier leaks, we came to know there will be two RAM variants with 6GB and 8GB RAM.The phone will be made out of metal and Ceramic similar to Mi Mix.We have to wait for few more days for the official announcement of the new Mi Mix 2.