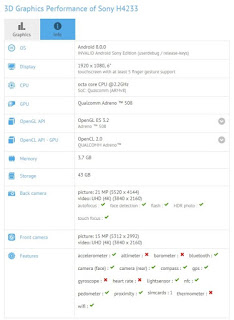 Android Oreo has still not reached the Pixel and Nexus devices yet but seems to be Sony’s 2017 flagship are the first to come with Android Oreo even the recently launched Sony Xperia XZ1 series had Android Oreo out of the box.

As of now, we don’t have any details regarding the launch and availability.As per the specs, we can expect it to be a mid-range device from Sony.