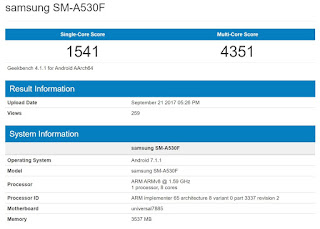 The last letter F stands for the International variant with Single SIM, but the device will also have Dual SIM version.As per earlier leaks, the Samsung Galaxy A5 2018 edition will be powered by latest Exynos 7885 but as per Geekbench, there is no mention of Chipset model.The chip used is built on 14nm process and comes with 2 cores of Cortex A73 powerful cores and 4 cores of Cortex A53 as low power cores. The Chip is clocked at 1.59 GHz and is coupled with 4GB RAM, there is no mention of internal storage.The A5 2017 was using Exynos 7880 chip which had all 8 cores running on low power Cortex A53 cores so with the latest chip we can see there is a bump in performance.