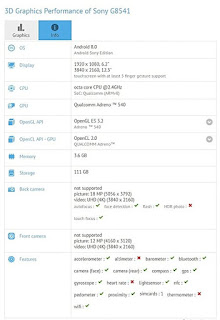 As per GFX, the upcoming Sony device is having model number Sony G8541. It is having 6.2 inches FHD display with a separate 12.3 inches displays with a resolution of 3840 x 2160 pixels. Probably the second display with 12.3 inches it might be a mistake from GFX while calculating display related info or might be a device with tablet variant.

Sony G8541 is powered by Unknown Qualcomm chip clocked probably SD835 chip at 2.4 GHz coupled with4GB RAM and 128GB internal storage.It is having a 18MP rear camera with 4K recording support, face detection, AF and LED flash.The selfie camera is of 12MP and also support video recording up to 4K.The device is running Android O aka Android Sony Edition out of the box.

We have to wait for few more weeks for some more details of the device.