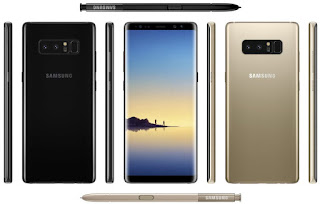 Samsung Galaxy Note 8 final leaks were out yesterday, shared by the same person Evan Blass who even shared the final press renders too.As per latest leaks, Samsung Galaxy Note 8 is having similar design one found one S8 and S8+ but doesn’t look identical, now the corners of the device are squared than the S8 duo.Now the Samsung Galaxy Note 8 will have 6.3 inches QHD+ AMOLED Infinity display with a resolution of 2960 x 1440p and have an aspect ratio of 18.5:9.The display found on Note 8 is same as S8 and S8+.The phablet now has a dimension of 162.5 x 74.6 x 8.5mm which means it is slightly thicker when compared to Note 7 which was 7.9 mm thick.

Samsung Galaxy Note 8 is powered by Exynos 8895 chip or SD835 chip based on markets. It is now having 6GB RAM and 64GB onboard storage which can be expanded via microSD card.All this is fueled by 3300 mAh non-removable battery which supports fast charging.The device will come n two colours one with Midnight black and other with Maple Gold.The other colours like the Deep Sea Blue and Orchid Grey will be launched later during the Holiday season.Samsung Galaxy Note 8 is going to be launched on August 23 at New York and is rumoured to be priced above $1000.