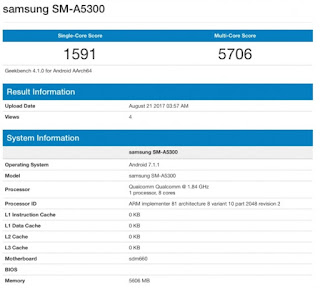 As per Geekbench, the model number SM-A5300 is powered by SD660 chip coupled with 6GB RAM.So we can tell the device is much powerful than the predecessor.The device is running Android 7.1.1 out of the box.

The SM-A5300 scored 1600 on single core test and scored 5706 on the multicore test.As of now, we are still not sure whether there is any device with model number SM-A5300 or not we have to wait for few more weeks for some more leaks regarding the device.

Apart from that, we got some new images of the device with the case attached.The Samsung Galaxy A5 2018 cases were recently listed on Amazon India website.The case displayed is the flip case which has transparent front and expected to have Samsung’s Always On display feature. 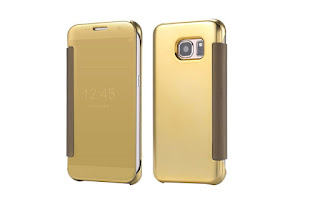 The case is made by company name Sailogic and is listed on Amazon India without pricing details. But they have mentioned the dimension as 27 x 15 x 5 cm.From the leaked renders we can see the back of the device which has Single Camera module with Dual LED Flash and Heart rate sensor.At the front, it is covered with the flip case but we can see the earpiece cut out on top with some sensors on the left and front-facing camera on right of the earpiece.It has the power button on the right.There is a Physical home button which might have a fingerprint scanner embedded on it below the display with two capacitive navigation keys.

We are not sure whether the leaked images are real or fake. We can take this leaks as the pinch of salt and have to wait for few more days for some more details.