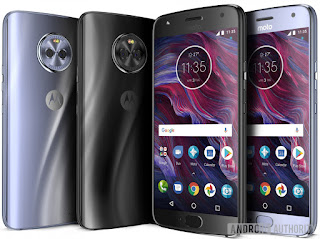 From the above image, we can see the Moto X4 having thick bezels on top and bottom of the display. It has very thin bezels on both the sides of the display.The device looks similar to earlier leaks.It is now having front mounted fingerprint scanner below the display which doubles up as Physica home button.The Moto X4 will be available in Black and Light Blue colour as per above images. At the top of the display, we can find the front-facing camera which is rumoured to be a 16MP sensor with f/2.0 aperture and  LED flash.At the front, we have the 5.2 inches FHD display.

At the back, we have the glossy back with horizontally aligned Dual Camera setup which is rumoured to be of 13MP sensors as per earlier leaks. But with new leaks, the rear camera will be of the 12MP with f/2.0 normal camera and 8MP wide angle lens with an aperture size of f/2.2.There is Dual Tone Dual LED flash in between the camera.

The Moto X4 weighs 163 grams and is just 7.99 mm thick.As per Lenovo owned Motorola the Moto X4 will come with SD630 SoC but  RAM and storage will be different for some regions.For countries like Latin America, North America and Europe will have 3GB RAM and 32GB onboard storage and in some Asian countries will come with 4GB RAM and 64GB onboard storage.Moto X4 will be powered by 3000 mAh battery and is running Android 7.1.1 out of the box.Moto X4 is also having IP68 cerified which makes it water and dust resistant.