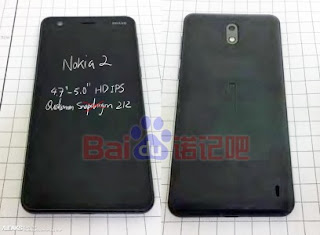 From the leaked images, we can see the Nokia 2 which has a similar design as Nokia 3, 5 and Nokia 6.There is no Nokia branding at the back of the latest images of the Nokia 2, but there is written as a brand on the top of the display where Nokia branding will be added later.

As per earlier leaks, the Nokia 2 will have 5 inches or 4.7 inches 720p HD display.It will be powered by SD212 chip coupled with 1GB of RAM.There are no details of internal storage as of now.The device is running Android 7.1.1 out of the box.Nokia 2 will sport 8MP rear camera and 5MP selfie camera.As of now, there are no details regarding the battery capacity, but it might come with the lower capacity battery as it is a budget smartphone.

The recent images of Nokia 2 found on FCC match the past leaks of the device.So we can expect Nokia 2 might launch anytime soon.