Home LG LG V30 to come with Immersion TouchSense technology.
Facebook
Twitter
Pinterest
WhatsApp
LG is all set to launch their next flagship with LG V30 in IFA Berlin on Aug 31 and now we have news from Immersion Technologies that they have extended their agreement with LG Electronics for licensing its Haptic feedback technology and their new TouchSense technology will be featured on the next flagship smartphone from LG with LG V30. 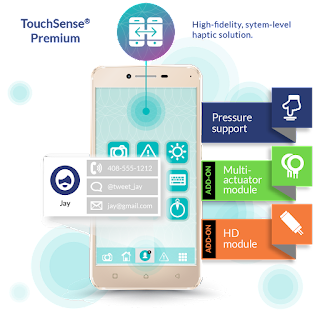 As per press release by Immersion technologies, the HD Touch Sense technology has high-fidelity, system-level solution supporting standard-definition and high-definition effects.The new Touch Sense tech will provide an immersive experience on LG V30.Touch Sense will enhance the user experience to next level and the not only manufacturer can tap on it but even app developers and user experience developers can tap on it.
LG V30 is not the only device to feature TouchSense technology, we can see this even on Samsung Galaxy Note 8 and Google Pixel 2 series.Immersion Technolgy is a well-known brand in making displays and is the same brand behind haptic feedback tech.
LG V30 comes with 6 inches POLED Full Vision display with an aspect ratio 18:9.It is powered by SD835 chip coupled with 4GB/6GB RAM and 32GB/64GB onboard storage.LG V30 is scheduled to launch on August 31 in LG’s IFA press conference at New York.
Source
Share
Tweet
Share
Pin
0 Shares