Facebook is popular Social Media website among masses and Facebook Messenger is the most used Chat app by users worldwide.With that popularity, Facebook is planning to launch a video chat device specifically for people to chat with their friends at Home. 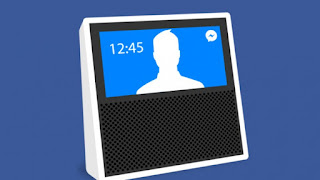 There are rumours that the Video Chat device will have 13 to 15 inches touchscreen and might run Android OS.It will also have a Wide-angle camera and AI-powered microphones and speakers.The device is still under testing phase, including “in people’s home” despite it is still a prototype phase.With the help of large screen and smart camera tech, the Facebook wants users to feel that they are in the same room.

The video chat device is best to use in the Living room.One of the prototypes is having a thin vertical stand that holds the display.The device smart camera automatically scans the people in its range and locks the device.An example is that the Child has made a painting which he wants to show to parents who are on the trip so this camera will automatically zoom on to the painting.

Facebook is also making 360 degrees camera for the device but will not launch with the device and might launch later.The Video chat device will be officially launched at the F8 developer conference.It will cost somewhere around $100.Facebook is also working on the smart speaker to give competition to Google Home, Amazon Echo and Apple HomePod.The Facebook speaker will be priced below $100.