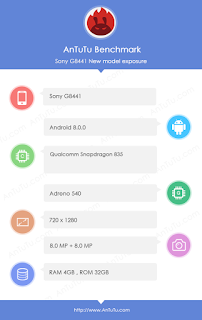 As per the above-leaked details, Sony Xperia G8441 will just support 1280 x 720p display is a shock considering it is a flagship device. But earlier models like XZ Premium and Sony Xperia Z5 Premium too had the capability to turn the display to lower resolution when required so it might have higher resolution display.Sony Xperia G8441 is now powered by SD835 chip coupled with 4GB RAM and 32GB onboard storage which can be expanded via microSD card up to 256GB.

Sony Xperia G8441 comes with 8MP rear and 8MP front facing camera.The selfie camera might come with wide angle lens.Sony Xperia G8441 is running Android 8.0 out of the box with Sony’s UI on top of it.As per the above specs and details, we can tell that the model Sony Xperia G8441 might be the Compact version of the Flagship. We have to wait till Sept 1 for the official announcement for the same.