Home Apple New leaks shows iPhone 8 to have rear mounted fingerprint scanner.
Apple is all in news with the most rumoured smartphone with iPhone 8. With back to back leaks of the upcoming iPhone 8, now we have some more leaks about the same. 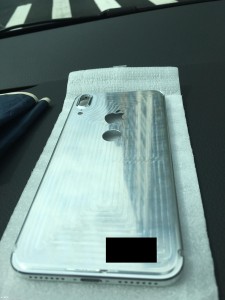 Apple upcoming iPhone 8 is rumoured to have a completely bezel-less display and will be built with metal and glass design as per earlier leaks. It was also rumoured to feature optical fingerprint scanner under the display, but earlier rumours claim that Apple is unsuccessful to implement the under display fingerprint tech.Now we have latest leaks of the iPhone 8 which shows a hole at the rear of the device which conforms to have a fingerprint scanner at the rear of the device. 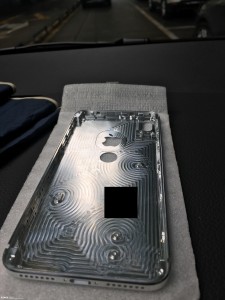 From the leaked images, we can see the fingerprint hole just below the Apple logo at the back.And now the iPhone 8 is having all metal body, but as per earlier leaks we saw metal and glass back, but from this leak, we can see that iPhone 8 is having a metal back with a cutout for fingerprint scanner at the back.But earlier leaks from all major case manufacturers didn’t show any such details of rear mounted fingerprint scanner or even the metal unibody construction.

We can’t say that the above images are real.We might expect next iPhone 8 will come with under display fingerprint tech.We have to wait for few more weeks for some more info for the upcoming iPhone 8.