Home Lenovo Moto X4 leaked again with dual camera setup.
Lenovo-owned Motorola is all set to launch series of devices after the launch of  Moto Z2 Play. Moto is planning to launch the successor devices with Moto Z2, Moto Z2 Force, Moto X4 and Moto G5S+. Now we have few more leaks of the Moto X4 which is rumoured to launch soon. 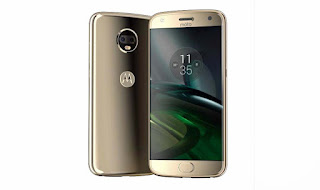 As per render images by Evan Blass, we can see the Moto X4 with glossy Gold colour and have dual camera setup at the back.It is having a physical Home button below the display which doubles up as a fingerprint scanner.It has Moto branding above the display with an earpiece and Single Lens camera setup with LED flash.There is similar kind of circular camera protruding at the back accompanied with Dual LED flash and Moto dimple below the camera module.

The Moto X4 will have 3.5mm Audio port. It is powered by SD630 chip coupled with 4GB RAM and 64GB onboard storage which can be expanded via microSD card up to 256GB.According to reports, the Moto X4 is also having IP68 certified which makes it water and dust resistant.Moto X4 has dual camera setup with a 12MP camera and 8MP secondary camera at the back. It has a 16MP front facing the camera.It is still not confirmed when will the Moto X4 will launch. so we have to wait for few more days for some more details regarding the price and launch date.
Share
Tweet
Share
Pin
0 Shares